How Hearing Works in the Ear

10 Dec How Hearing Works in the Ear

Posted at 20:46h in Hearing Loss by AudioCardio

Hearing begins with the outer ear. The outer ear consists of two parts: the pinna and the ear canal. The pinna and the ear canal can naturally boost sound levels up to a frequency of 3,000 Hz. This is very helpful for everyday speech because the outer ear is what helps us understand the different consonant sounds of speech. The curves and ridges that you see on your ears make up the pinna. The pinna collects sound waves, which are the vibrations in the air around us. The sound waves travel through the ear canal and into the eardrum.

It is in the eardrum where naturally occuring wax coats the skin to act as a protective barrier. Earwax serves many purposes, such as acting as a natural cleanser and providing lubrication while protecting us from bacteria, fungi, insects, and water. As long as you don’t have excessive earwax and it’s not blocking the ear canal, earwax can be seen as a good thing. 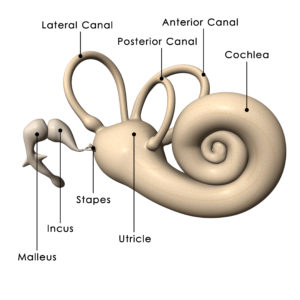 The eardrum is a thin membrane that separates the outer ear from the middle ear. The eardrums vibrate from the incoming sound waves. These vibrations in the eardrums are sent to the middle ear, which is composed of three of the tiniest bones in our bodies – the malleus, the incus, and the stapes- known together as the ossicles. The ossicles amplify the strength of vibration and delivers them to the cochlea, a snail shaped canal that is filled with fluid, located in the inner ear. 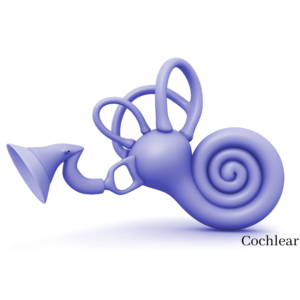 The stereocilia are microscopic hair-like projections that sit on top the the hair cells. Fluid movement causes the hair cells to move up and down, bending the stereocilia and causing pore-like channels to open up, letting chemicals rush into the cells and creating an electrical signal.

For a more in-depth step-by-step explanation about how we hear, click on the links below.